Dreams and premonitions were often one and the same for Jacqueline. She always had trouble distinguishing between the two. She was haunted by dark futures. With the help of these omens, she could see the narrow paths that could prevent disasters from happening. Often enough, however, such paths also led to mortal perils...or worse. In her final vision, Jacqueline was able to glimpse events that could end in two ways. Either the thin status quo between the mundane and the supernatural could be maintained, or Arkham would be plunged into absolute chaos. Everything would start with a theft. This would lead to a chase. Then there would be a confrontation. And after that... She couldn't see any further.

Jacqueline would have to play her part as the linchpin of it all. She opened the gym door and looked around, as out of place as she could be here. Luckily it didn't take her long to find the man of her vision: Nathaniel. That was how the poster in front of the door introduced him. The boxer had just finished his workout and was drenched in sweat. He greeted her reluctantly as she approached him. "If you want tickets to my next fight then..." he began.

"I'm here for something far more important," she interrupted. His gaze wandered from one of the two exits to the other. "Why is? Are you having trouble with the O'Bannions?" She noticed that he clenched his hands into fists. 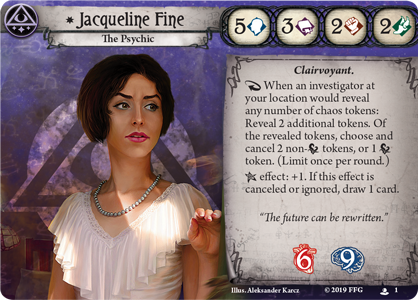 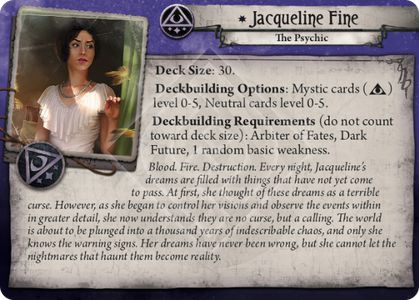 Jacqueline is an adaptable mystic who relies on the synergy of her cards, specializing in manipulating skill tests and predicting their results. Her ability to momentarily see into the future and choose the most favorable outcome greatly aids her in skill tests that would normally pose great problems for her. You can also play Jacqueline more as a support. Then it is your job to absorb the weaknesses of your group members and help them to fulfill their goals.

Jacqueline's deck contains spells for all occasions: investigation, combat, and escape. With high Willpower and low Combat and Agility stats, you must rely on these spells to advance. Each of these spells has a disadvantage when one of the better chaos tokens (, "+1", or "0") is revealed. Therefore, it would be beneficial if you could also pass the test without having to reveal those markers. The Ritual Candles perk card can help you pass the test even if you reveal another symbol. Don't forget to always draw 1 card when you cancel Jacqeline's  effect! Normally you only have 2 arcane slots available. But if you want to play with all 3 spells at the same time, you should ask the ghostly familiar for help.

Jacqueline's ability will often be used in skill tests.

But she can also be used to gain more power from her event cards. You can use it e.g. For example, avoiding the disadvantage of Astral Travel or making sure you get the bonus effects of Mesmerizing Gaze or Voice of Re. It can also be used to get rid of their Dark Future weakness.

If you're playing in a group of investigators, it would be best to stay with your group members, using your ability and scrying mirror to help them succeed in their tests.