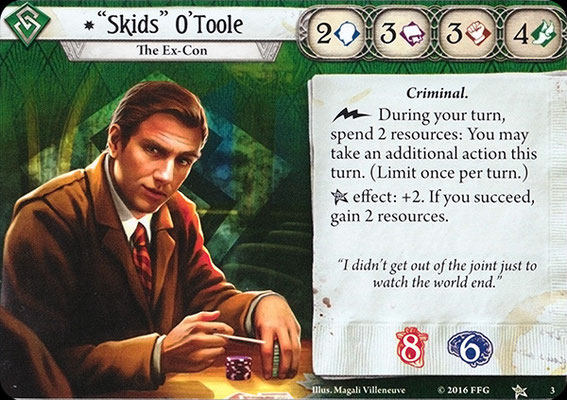 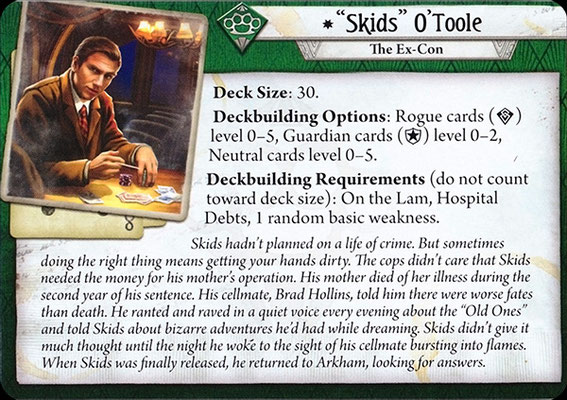 "Skids" o Toole, the rascal of the Inverstigators. Well, we can't really call it a crook. His mother became seriously ill and Skids needed money for the operations. This made him a rascal, because he meant well but everything turned out wrong. In his 2nd year of imprisonment, his mother had died. His cell buddy tells him there were worse things in the world than just death. His cellmate was always whispering in his sleep ... something about the "Old ones". Skids had never understood this what it was about, but one day his cellmate went up in flames. Now that Skids was free again, he went back to Arkham for answers.

Skids is the first inverter of the Roque section. These specialize in manipulation and evasion of enemies and treachery cards. This section also stands their ground when it comes to combat. They have come with handy tools to know how to escape even in the most oppressive situation. This is one of our favorite sections that we play with.

His stats say enough. 2/3/3/4 They have little willpower, which is a bit strange when you read his flavor text. But they are masters of dodging bad cards. Their strength is also average, but with the right tools such as a Switchblade you are always ready. His 8 health and 6 horror is average. High health and low sanity mean that Skids is just a human being and must brace himself for what he is going to experience mentally in Arkham.

Ability for an extra promotion, which is insanely good. The Roque section is known for getting resources quickly. Pay 2 resources and you will receive an extra promotion. This is only one per turn, but you can keep pace and that is the key to success. We will discuss the story about TEMPO in the next blog.

His super star ability is also a cool combination, you not only get +2 for the skills test but also 2 free resources. Which means if you had not already done this this turn an extra action. Actions are crucial, so this ability always works out well.

As you already know, each investigator has its own special card. For Skids that is On the Lam, you don't want to fall again, so this event gives you a one-time chance that no enemy can attack you. So you are safe for 1 turn. You then have 3 actions that you do not have to spend on Fight. You also do not trick any attacks of opportunity. You can now safely think about your next move. This event card also has 4 icons that you can use for a skill test. 2 random icons that you can fill in yourself. 1 book and the other one you use for evade. Also a handy card if you want to use it for a skill test.

Of course you already know his story, because you just read it at the beginning of this article. It was all about his mother. He became seriously ill and the costs could no longer be paid. Hospital costs accumulated today also this weakness card Hospital Debts. If you draw this card, you must pay off your debts to the hospital before the end of the scenario. You must move a total of 6 resources to this card and max 2 resources per turn. If you don't do this, you will miss 2 exp points and what you could already read in one of our blogs, this is a missed opportunity because you can buy fewer new tickets for the following scenario.