Nathaniel cracked his knuckles. The last bat backed up until

his back hit a wall in the side street. He was clutching a huge book in both arms like a small child. The rest of his party lay on the ground around Nathaniel, writhing and groaning. "The book," the boxer demanded, holding out his hand. "I won't ask again."

Winifred, who had been watching the pugilist at work, whistled appreciatively. "I'd listen to the man if I were you," she advised the gangster, "or you'll end up here like your buddies."

But the thug shook his head. "I can't." He stared at her pleadingly.

Nathaniel made a face. The man was afraid, but not of him. Something else terrified him. Something that had to be way worse than Nathaniel's fists. "It's that brotherhood, isn't it?" he hissed. He didn't yet know their hidden motivations, but he knew all about the secret cult behind the gang's actions.

Panic flickered in the thug's eyes. Beads of sweat ran down his forehead. "Just give us the book, then nobody will harm you,

okay?” Wini spoke up, but the man collapsed against the wall and clutched the book even tighter while muttering anxiously to himself.

What is it that terrifies him so much? Nathaniel thought. Then he heard a noise behind him. A soft but constant scratching - scary to hear. At the entrance to the side street, something scraped across the cement floor – no, it literally tore the floor open – this scratching again step by step. Nathaniel held his breath, gritted his teeth, and prepared to face the new terror. 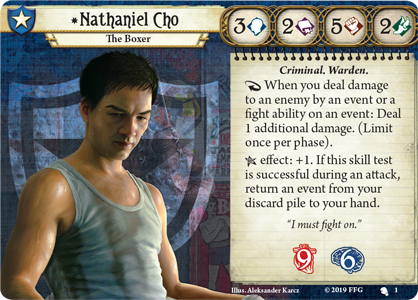 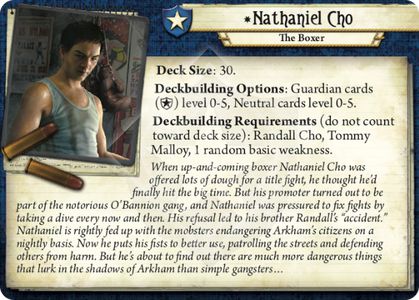 Nathaniel is a fighter who relies heavily on Event Card combinations to take down opponents one at a time. Few can match him for the amount of damage he can reliably deal. An experienced and skilled boxer, Nathaniel has an arsenal of event cards (such as Monster Slayer and Left-Right Combo) to bring down even the most resilient opponent.

Of course, Nathaniel's favorite weapon is his boxing gloves. In addition to increasing his skill in fighting, this item is an important part of the deck to regularly find new event cards, which in turn can trigger Nathaniel's ability. If you don't have the boxing gloves in your starting hand, it's a good idea to spend actions to draw cards. This should either find you the boxing gloves or event cards that allow you to deal more damage.

After defeating an opponent, you should use the Event card to Fame

Draw 2 cards, use boxing gloves to get ghost event cards, or discover 1 clue with Grete Wagner. You can also slow down your opponent by playing dodge to nullify their attack and immediately countering with a deadly counterblow.

Randall Cho always babysits his younger brother Nathaniel. If Nathaniel has taken a few hits or if he needs a motivation boost, then he will

Randall is there to heal him or equip him with boxing gloves for the next round.

One theme Guardians are known for is teamwork. Cards like Stick Together and Safeguard are examples of providing other players with resources or protecting them from opponents. In solo play, these two cards should contribute to skill tests and be replaced once you've earned enough experience points.